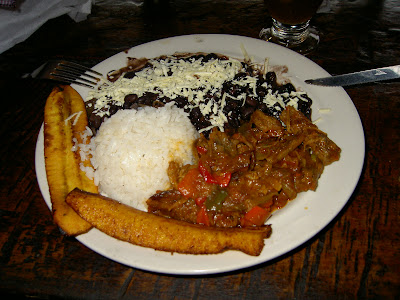 Pabellon Criollo is not only Venezuela's national dish, it's also emblematic of the country; a hearty plate of simple food that mirrors the national flag and highlights the special mix of races that has made Venezuela a country of beauty queens.

A delicious combination of carne mechada (shredded beef), arroz blanco (white rice), caraotas negras (black beans) and tajadas (fried plantains), there are few places in Venezuela that you won't be able to find pabellon on the menu.

Look for the menu del dia or the menu ejecutivo, the cheap lunch options offered at many places, which generally include a soup as a starter, a fruit juice and sometimes a dessert.

Even in the humblest of luncherias pabellon should be accompanied with arepas, the cornmeal staples that Venezuelans eat in place of bread or rolls.

If you're really lucky your pabellon will arrive with a generous helping of salty white cheese grated over the black beans, or a slice of avocado on the side.

For a fried egg on top of the beef ask the waiter for your pabellon "a caballo" ("on horseback").

If you want to be really Venezuelan about it, you might want to follow local custom and stir a couple of teaspoons of sugar into the beans.

But the secret of any great pabellon is in the sofrito, the combination of onions, sweet peppers, bell peppers and adobo (seasoning) that the beef is cooked in, especially the amount of cumin used.

Along the coast, in Choroni, or in Margarita, the shredded beef is often replaced with cazon, or baby shark.

The most exotic version of the pabellon is served during the Catholic fasting period of Lent when you may find chiguire meat in place of the beef.

The chiguire is a large guinea-pig like rodent, better known outside Venezuela as a capybara. These giant rats may not look very appetizing, but they hold a special place in the cuisine of the Llanos, the seasonally-flooded plains populated by horse-riding cowboys.

Somewhat bizarrely, in the 17th century the local creoles were able to get the capybara classified as a fish by the Catholic Church, although it probably helped that nobody in Rome had ever seen one before.

It's certainly the oddest fish I've ever seen.

The closest translation of the name Pabellon Criollo is "Creole Flag," a clue to the patriotic significance that it holds for some Venezuelans, who see the yellow, red, blue and white of the national flag in the colours of the ingredients.

Other commentators see in it a reflection of Venezuela's racial mix: the indigenous Amerindians, Spanish conquistadors and African slaves who went into the country's melting pot.

More importantly for the traveller, pabellon is a healthy, filling lunch option that won't stretch the budget, although it might stretch the seams of your jeans if you overdo it.

Glossary: Eating at an Arepera
Posted by Russell Maddicks at 11:07 AM

I love Venezuelan food and would like to make it at home in the USA but I need some recipes.

Can you post the recipes for black beans and the shredded beef and give some tips on where to get the ingredients.

Congratulations on your web site!
The recipes are super accurate. I'm from Caracas and I'm following your recipe for Carne Mechada to serve it to my boyfriend here in Canada.
Cheers,
Maria.

do you have the recipe for the tajadas?

Beautiful photo of one of my favorite dishes in the world!!! I love it, especially with super ripe, sweet platanos :o)

my mom is venezuelan and a good cook. she can make this!