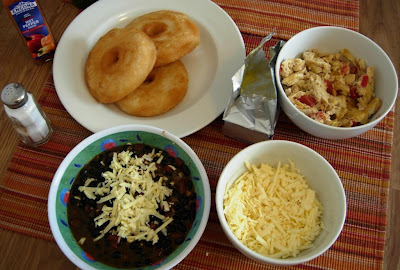 Tasty, cheap and nutritious, black beans are as emblematic of Venezuela as the colours of the flag - and they're good for you.

And while other Latin American countries might refer to their beans as frijoles, porotos, judias or habichuelas, in Venezuela they are always caraotas.

In England they are often sold as Turtle Beans, a name which comes from the Caribbean and is said to be inspired by their hard shiny shells.

They can be served as a soup, as a side order with a main meal, or refried and used as filling for empanadas and arepas.

They are also the only ingredient in the national dish Pabellon Criollo that is truly indigenous to the Americas, because rice is originally from India, plantains were brought to Venezuela from Africa and the beef comes from European cows.

But you don't need to stick to Venezuelan recipes. Once cooked, black beans can be used instead of kidney beans to give a creamier flavour to Chili con Carne or thrown cold into salads for colour, texture and added protein.

Black beans are incredibly healthy, with a high fibre and protein content.

Recent scientific research has proved that black beans are a Super Food - loaded with high levels of antioxidants, special molecules that help the body to fight heart disease, cancer and ageing.

Because of the dark pigments in their skins, black beans have 10 times more antioxidants than oranges, for example, and significantly more than grapes, apples and cranberries.

However, like all other members of the common bean family (Phaseolus vulgaris) black beans contain a compound called lectin that must be neutralized by soaking the beans overnight, changing the water and then boiling them vigorously for 10-15 minutes before simmering. Never cook dry beans in a slow cooker or you'll have a nasty bellyache.

And don't worry about that other effect from eating beans; flatulence. Nobody need blame the dog if you add a pinch of bicabonate to your beans while soaking.

The good news is: black beans are delicious, cooking them is simple, the ingredients are available at all good supermarkets and you can adapt the dish for vegetarians by leaving out the pork.

This recipe is for a basic black bean soup. To make the soup creamier simply put half of it in the blender and liquidize before reheating. To garnish, add a dollop of creme fraiche or natural yoghurt, with a few chopped coriander leaves on top for decoration.

For an authentic Venezuelan touch sprinkle with grated cheese. Some Venezuelans like to sprinkle two or three teaspoons of sugar over their beans but I never got used to eating them sweet.

If you want to serve the beans with rice or as a side dish to accompany fried yuca (cassava) you can simmer the beans to reduce the liquid. Don't boil the beans when reheating as you will spoil the flavour.

Black bean soup will keep in the fridge for four days or can be kept frozen for a month.

1. Place the beans in a large saucepan or bowl. Cover with tap water leaving at least an inch of water above the beans as they will swell. Add a pinch of bicarbonate of soda. Leave overnight.

2. Before cooking, drain and rinse beans under the tap. Place in saucepan or pressure cooker and cover with fresh water. Bring to boil and boil vigorously for 10-15 minutes. Add no salt.

4. To make the sofrito used to flavour the beans finely chop onions and peppers.

7. Heat olive oil in a frying pan. Add onions and when they start to brown add pork and peppers and garlic.

6. Season with salt, pepper, oregano, a small pinch of cumin and Worcestershire sauce and when all ingredients are cooked remove from heat.

7. When beans are cooked place some of the water and beans in a blender, add the cooked sofrito and blend until creamy. Pour back into beans and simmer to reduce and allow flavours to combine.

8. Finely chop coriandor and add to beans just before serving, stir through. 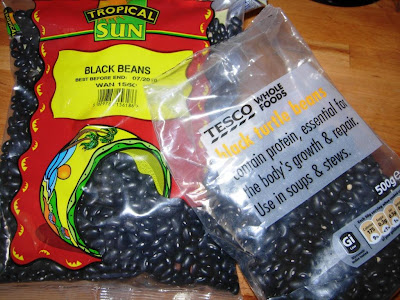 Posted by Russell Maddicks at 8:51 AM

I simply love black beans and you can get them everywhere now in the UK, both dried and tinned.

The tinned varieties can be expensive, Epicure black beans are like 79p in Waitrose but Tropical Sun tinned beans are only 59p in Tescos.

When are you going to post the recipe for the arepas?

I got the harina pan flour in London, in that small arcade in Brixton but I want you to take me through the process step by step cause I ended up with a soggy mess last time I tried and I'm sure it shouldn't be like that.

By the way, Russ, there's a blog called Bienmesabe where you can find recipes for good ole venezuelan deserts. It's in Spanish. There's a link for it in my blog.
besos

Thanks for the comments.

This is the recipe I got from mi suegra.

I believe I do include cumin in the recipe and mention the sugar.

I think everybody will find their own recipe after a bit of practice.

I'm still practicing my cachapa recipe, for example, but it's hard to get the consistency right so I'm still missing something.

I have the same problem with making cachapas. Someone told me to put some harina pan in there to make it thicker.

For those looking to get the cachapas to work out...it's hard because the corn is different in other countries. I am in the US and the corn here is delicious for eating, but a disaster for cooking because it has so much water, wereas the corn in Venezuela is so much more dry, whihc makes it not as good for eating but you can make fantastic things with it. Long story short, if you are making cachapas, you may need to use little to no milk and maybe help thicken the mix with corn flour (right, harina pan)