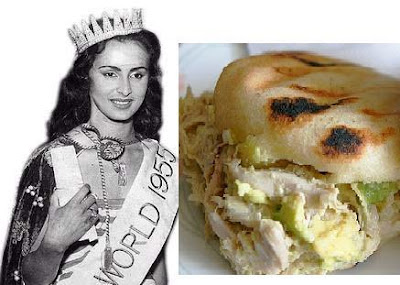 The "Reina Pepiada" is one of the most popular arepa dishes in Venezuela: a lip-smacking combination of shredded chicken, mayonnaise and petit pois stuffed into a grilled cornmeal arepa with slices of soft avocado.

Like the doner kebab in Britain, the Reina Pepiada - or Reina Pepeada in some places - is a firm favourite with drinkers and ravers who flock to late night areperas after the bars and clubs shut to soak up the alcohol with a "Reina" or two, preferably drizzled with spicy hot sauce.

But even after fifty years at the top of the arepa food chain few people know that this local delicacy is named after Venezuela's first international beauty queen Susana Dujim.

A stunning morena with jet black hair and a smile that could light up a city, Dujim was crowned Miss World in London in 1955, becoming the first South American to ever hold the title.

Venezuelans all over the country were immensely proud of her achievement but none more than the Alvarez brothers from Trujillo State who had recently opened an arepera on Gran Avenida between Plaza Venezuela and Sabana Grande in the capital Caracas.

That was back in the days when stuffed arepas were called "tostadas".

Heriberto Alvarez, now 83, said that in order to pay homage to Susana Dujim's amazing achievement the brothers decided to dress up their 12-year-old niece as a beauty queen and sat her on a kind of altar so she could be seen from the street.

"A man passed and asked us why we had this girl here," Heriberto told food writer Alberto Veloz.

Much to Heriberto's surprise, the man turned out to be Susana Dujim's father. He was so pleased with their tribute to his daughter that he brought her to see them the next Friday.

"I gave her a tostada and I told her: 'Look, this tostadita was specially prepared by my mother and its going to be called La Reina, just like you,'" said Heriberto.

"And because in those days curvaceous women like Susana were called 'pepiadas', we gave that name to the arepa," he adds.

So there you have it. The origin of the "Reina Pepiada" or the "Curvy Queen" - named after a true Venezuelan beauty, Susana Dujim, Miss World 1955.

A Glossary of Arepas

So I bought a bag of P.A.N thinking it was to make tortillas. lol
So I found your blog and I am attempting to make Arepas right now.
Keep your fingers crossed lol