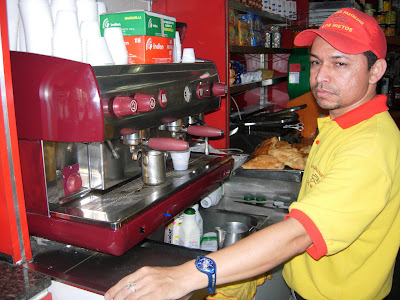 You can credit Starbucks for the annoying coffee snobbery that turns seemingly normal people into seething wrecks of a morning if they can't get hold of their usual "grande, half-caf, non-fat, sugar-free, double-shot, extra-foam, no-whip, pumpkin-spice latte - with extra cinnamon", or whatever over-frothed, over-priced muck they drink in place of regular java.

But all the Starbucks snobbery in the world will cut no ice in Venezuela, where the usual coffee rules don't apply and the etiquette of ordering is as important as knowing the subtle differences between a con leche grande and a marron claro grande.

The best place to get a caffeine fix in Venezuela is definitely at your local panaderia. Literally translated as "bakery", a panaderia is much more than a place to buy bread and cakes. But it's the coffee that pulls the customers in, and panaderia coffee is worth standing in line for.

The quality of Venezuela's locally-grown coffee is excellent - mainly because the export market is so small that the best quality beans are consumed in the country, unlike neighbouring Colombia where all you can get most places is lukewarm Nescafe from a thermos.

The great coffee experience to be had in Venezuela is also due to the huge influx of Italian immigrants - both before and after the Second World War - who not only brought with them Gaggia coffee machines but also the methods of dark-roasting the beans that gives them such a strong flavour.

No matter where you go, from the biggest city to the smallest village, every panaderia worthy of its name will have a Gaggia machine pumping out strong black coffee and steam to froth the milk.

Ordering coffee can be complicated for first-timers in Venezuela. Asking for "un cafe por favor" won't get you very far. 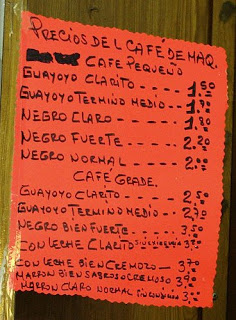 Basically there are two sizes available in most places: the larger cafe grande, which isn't that big by Starbucks standards and the smaller cafe pequeno, which is equivalent to a small expresso.

A large black coffee, or cafe negro grande, is strong enough to give some people the caffeine shakes, so one solution is the oddly-named guayoyo, a black coffee that has been slightly watered down.

If you're looking for a latte equivalent order a con leche grande. If you want it extra milky order a tetero grande. A tetero is a baby's bottle in Spanish so don't expect much of a caffeine kick.

If you like it extra strong remember to add the word fuerte at the end of your order.

Some people complicate the issue even further by ordering odd combinations like a marron claro grande, which is so close to a con leche grande that I can't see any difference.

The only other coffee you might want to order is the carajillo, a black coffee with a shot of rum or Brandy. The drink has its roots in the Spanish ocupation of Cuba, when the troops would get a little courage, or corajillo before a battle by adding rum to their coffee.

Don't expect the staff to fall over themselves to take your order. Most panaderias will a have signs up on the wall saying you have to buy a ticket from the cashier before ordering your coffee or snacks, so simply asking for stuff without a ticket to wave can result in a complete blank.

Even when you do get the ticket you still have to expect the sometimes overfamiliar interaction between staff and customers that is typical in Venezuela.

The first time I walked into my local panaderia, the girl who sold the empanadas and cachitos greeted me with a big smile and a cheeky: "Hola, ojos del mar, que quieres hoy?" ("Hi, blue eyes, what do you want today").

The serious looking kid with the moustache, meanwhile, would rarely utter anything more than: "Dime flaco!" ("Tell me, skinny!").

Any hesitation in giving my order would result in a lengthy wait while he served everybody else in the store, spoke to the empanada girl and swept up a bit, before finally coming back round to me with another: "Dime flaco!"

I guess I'm lucky, because I always liked the instant familiarity you get wherever you go in Venezuela. A lady friend of mine with a healthy, fuller figure was not so impressed. She never got used to people in stores saying things to her like: "Dime gorda!" ("Tell me, fatty!").

It was in my local panaderia that I made my worst ever Spanish error. Sent down by my mother-in-law to buy pan sobado , or soda bread, I made the mistake of asking for pan sobaco.

The girls behind the counter scrunched up their noses with that quizzical look that says "What?", looked at each other and then burst into fits of giggles.

Before I could reflect on my mistake they started shouting across the panaderia what the crazy gringo had just asked for, causing even more merriment from staff and customers alike.

"Que quieres flaco?" asked the coffee guy, cracking the first smile I'd ever seen on him and adding: "Ese pan que tu quieres no sabe nada bien" ("That bread you want doesn't taste nice at all").

In my confusion I had asked for "armpit bread". 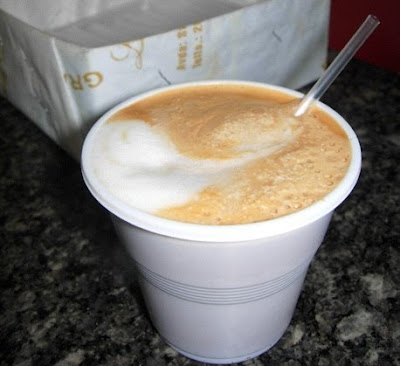 Posted by Russell Maddicks at 8:30 AM

So where can we buy Venezuelan coffee in the US of A?

I'm venezuelan living overseas, and I loved the blog!!!
Made me remember nostalgically "mi marron obscuro grande"... but the thing I loved the most was the "flaco, que quieres?"

Since you love so much venezuelan food, I will recommend you to buy "El Pan Nuestro de Cada Día". Is a Fundación Bigott publication, excellent edition and high quality as they usually do. Most important recipes from all around (centro, oriente, los andes, los llanos) with the history of each one. Sure you'll love it.

Im' Venezuelan, Russ and I thank you a million times for your good natured and funny perception of our singularity.
BTW, have ever you heard somebody saying "dame un negro corto", "dame un negro largo" and/or "dame un Obama"?

i realy love your blog.. im a venezuelan living in copenhagen. thanks for sharing this with us!!!

I would like to ask a Venezuelan to help me with a certain doubt I had (have) for years. It is about a Venezuelan expression "cafe negro". I heard it in early 1990s, and it was always translated something like "well done", "excellent" or something like that. Is this true meaning, and is it in use in Venezuela? I mean, the words are from Jose Ignacio Cabrujas...

Hahahaha I enjoyed it so much hahaha "Pan sobaco" hahaha So funny! You made me laugh!

Sorry, un marrón grande can't be stronger, because it has milk, right? For anonymous: cafe negro means black coffe in Venbezuela, nothing else.

A marron oscuro grande is a stronger version of a marron grande.
Both have milk but the oscuro has less milk and so is stronger. I am a Venezuelan and I have to say the author has it completely right.
I think the guy who made the comment about the cafe negro must have misread the report.
There's nothing like this anywhere else on the net. Bien hecho pana!

I'm trying to find somewhere in Seattle that sells Venezuelan coffee. My Venezuelan husband and I relocated here in May and he just used up his last bag of coffee from home. Any ideas? Or perhaps somewhere online?

I'm from Venezuela, let me tell you that Cafe negro as far as I know is just a very strong black coffee, but who knows I moved to USA more than 20 yrs ago.

Sweetie try to get it online from Miami, Doral or Weston (FL) groceries stores or Venezuelans bakeries (all South FL)