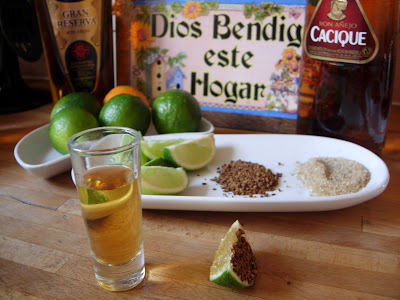 When it comes to rum cocktails, most people who like the occasional umbrella in their drink have tried a Cuban Mojito, a Strawberry Daiquiri or a Pina Colada, but how many people have tried Venezuela's wild and wonderful rum concoction El Ritual?

Closer to a Tequila slammer than a true cocktail El Ritual, as its name suggests, is not about mixing interesting flavours in a glass, but creating an event, performing a set of steps that allow you to mix the raw flavours in your mouth for a full-on explosion of taste bud-tingling tropical nonsense.

And you don't need to be a barman to make it. Trust me.

The first ingredient - and there's no point starting without this - is a shot-glass-sized-helping of aged Venezuelan rum.

Quality sipping rums like Pampero Aniversario, Cacique 500 or Santa Teresa 1796 are excellent for this, because they have the most complex flavours.

But don't be put off, any dark Venezuelan rum will do.

Second, you need a few limes cut into wedges.

Third, you pour brown sugar and instant coffee into two separate piles on a dish or tray.

Then all you do is take a lime wedge, dip one side into the sugar, the other into the coffee and bite and suck on it.

Immediately the bitterness of the coffee and the sweetness of the sugar will fill your mouth and threaten to overwhelm your tastebuds. But don't panic. Help is at hand.

Take the glass of rum and have a swig. You don't need to down it one just take enough rum into your mouth to let all the flavours mingle.

A second swig from the glass will bring in new flavours, as the rich warm buttery taste of the rum replaces the slight bitterness of the coffee and the shallow sweetness of the sugar.

When you've finished just lick your lips, get back in line and have another one.

It sounds like an unlikely combination, I know, but somehow it works.

And it's like rocket fuel at parties. Apart from the alcohol in the rum, the coffee and sugar work well together to lift the energy of a flagging get together or dinner. Serve a couple of rounds of El Ritual just before the salsa tunes kick in and strictly dance floor mayhem is sure to ensue.

There are no excuses for not experimenting with Venezuelan rums in the UK, Waitrose supermarkets currently stock a good aged rum from Santa Teresa called "Gran Reserva" and I've seen Pampero "Gold" on sale in bars, so it must be on sale somewhere (let me know if you find out where).

In Italy, El Ritual is a key element in Pampero's publicity campaign, which went out with the rather odd slogan: "Il rum piu bevuto nei peggiori bar di Caracas" ("The rum most drunk in the worst bar in Caracas".)

The TV ad (watch it below)shows a motley bunch of drinkers downing shots of Pampero Aniversario with lime, sugar and coffee as they watch a boxing match.

Given the usual parade of beautiful people with perfect smiles, gym bodies and silicone enhancements who populate drink ads in Venezuela, some Venezuelans took offence at the image of Caracas depicted in the ad - with its less-than-glamorous drinkers tottering about in a dive bar - but it was a big hit with the Italians and helped establish Pampero as a major player in the Italian rum market.

So try something new. Give El Ritual a go and let me know if it works for you. 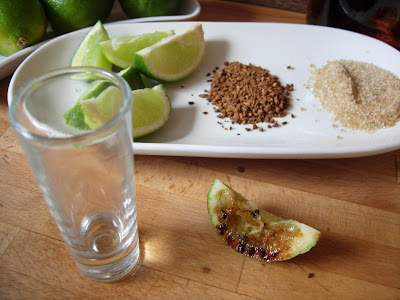 Posted by Russell Maddicks at 6:20 AM

I'm a big fan of El Ritual. It's one of the great ways to enjoy aniversario. If you like great rum you owe it to yourself to try it this way. I actually tried it with ground espresso, I think the richness and depth adds a little more. But yes, Amazing!

Pampero is the best good rum and Aniversario is excellent.
I live in Brighton now by the English seaside and I found Santa Teresa rum in Waitrose, so thank you for that.
Now I can make Cuba Libre cocktails and have salsa dance time with my new friends. Viva Venezuela!!!!

First time I hear about the El Ritual, I have around 9yrs Living in London and yes, I also found Santa Teresa in Waitrose... Now I buy it all the time. Will try el ritual this weekend. Arriva Venezuela :D

I REALLY like rum,but i prefer santa teresa! you can find it in waitrose and Harrods! VIVA VENEZUELA!!!!!!

I lived in Venezuela at a beach side community not far from Puerto La Cruz called Playa Colorada, and the bartender/cook/security guard at the small concession showed me how to make the best Cuba Libre (Mentirita*) ever.

Fill a glass to the top with cracked ice, add juice of 1/2 large lime, 3 drops of angostura bitters, add rum half way up, fill with coke (not pepsi), splash a cap full of gin on top. Best Cubi ever! Do it in this order, no stirring necessary. Just enjoy!

*Mentirita in spanish translates to "little lie" and he called the drink this because Cuba is not free. LOL