Gustavo Dudamel gets a hot dog named after him! 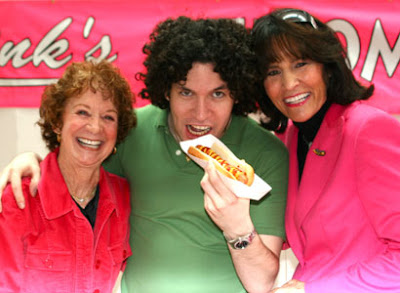 You know you've made it in Los Angeles when you get a hot dog named after you. Just ask Venezuelan conducter Gustavo Dudamel, the hottest property in classical music at the moment at just 29 years old.

Dudamel, who comes from Barquisimeto, currently spends his time between Sweden, where he is the principal conductor of the Gothenberg Symphony Orchestra, and the United States, where he's the musical director of the Los Angeles Philarmonic.

The mop-top conductor has made such a big splash in LA that Pink's, the most famous hot-dog joint in town, has invited him onto its Super Specials menu.

The "L.A. Philarmonic Conductor Gustavo Dudamel Dog" is a mouthful even before you tuck into this "stretch hot dog" covered as it is with guacamole, American and Swiss cheese, fajitas mix, and jalapeno slices topped with tortilla chips.

Family-run hot-dog haven Pink's has been feeding Hollywood stars and A-listers since Paul and Betty Pink first opened a fast-food stand on the corner of La Brea and Melrose in 1939.

Bruce Willis, Arnold Schwarzenegger, Snoop Dog, Jay Leno, the Hoff, there are few LA stars who have not popped in to this world famous landmark for a treat, but few are ever offered the chance to appear on the menu.

But why go for typical Tex-Mex ingredients, when the folks at Pink's could have made the maestro's dog more Venezuelan?

Where's the salsa rosada, for example, the unforgettable mixture of ketchup and mayonnaise that you only seem to find in Venezuela?

My last hot dog from a street stall in Caracas was a true work of art, a symphony of crushed potato chips and chopped up cabbage and onions slathered, with a conductor's flourish, in about six different sauces. 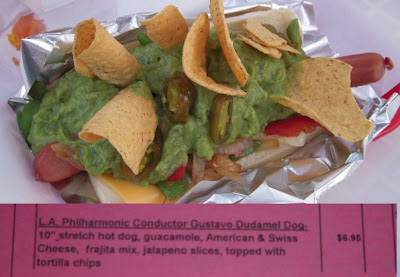 Posted by Russell Maddicks at 1:18 PM