To mark its 70th anniversary and 50 years producing Venezuela's first and most popular pre-cooked maize flour, the food and drinks firm Empresas Polar has made it into the Guinness Book of Records by cooking the world's largest arepa.

The monster maize bun was created from scratch on Wednesday, 23 March 2011, by a host of Polar employees at the company's headquarters in Los Cortijos, Caracas, who used traditional techniques to mix Harina P.A.N. (the pre-cooked maize flour used to make arepas), with water, salt and a little oil to produce the masses of dough needed for the record-breaking attempt.

The final mega-arepa measured over 6 metres in diameter and had to be cooked on a specially-designed budare (griddle).

The invigilator from the Guinness Book of Records, Ralph Hannah, said the arepa had "to be made in a the traditional way, that's to say, by hand, and must be cooked".

He then tried a slice and certified that it complied with the criteria for consistency and taste, effectively giving Empresasa Polar and Venezuela the record for the largest arepa in the world.

The president of Empresas Polar, Lorenzo Mendoza used the occasion to stress the importance of arepas in the Venezuelan diet, saying that "there is nothing more Venezuelan than the arepa" and that Venezuelans consume 33 kilos of pre-cooked maize flour per capita every year.

Empresasa Polar began in 1941 with the production of Polar beer, still the most popular beer in Venezuela. In 1960 it launched the country's first pre-cooked maize flour, Harina P.A.N. 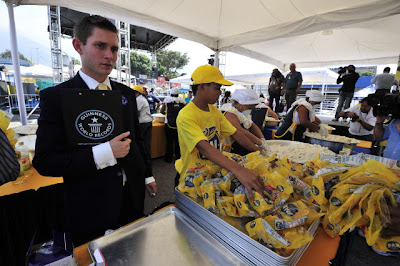 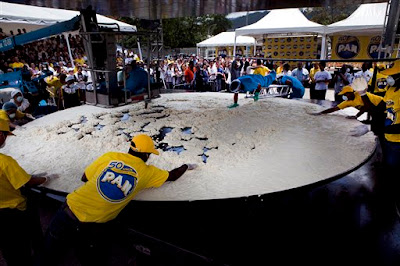 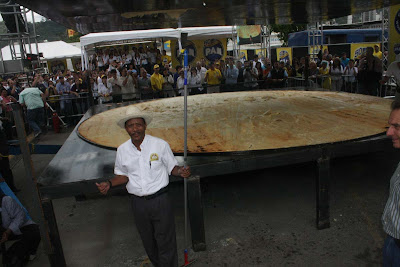