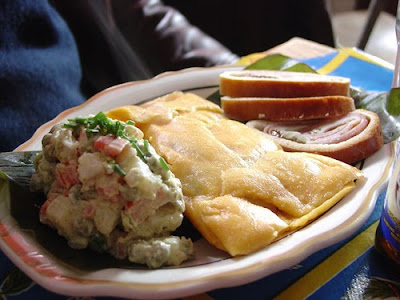 Christmas wouldn't be Christmas without all the usual Venezuelan festive foods so the Embassy of the Bolivarian Republic of Venezuela in London has organized a Christmas Bazaar at Bolivar Hall on Sunday 11 December with stalls selling all the seasonal treats you need for a feliz navidad Venezuelan style, as well as rum, music, and a raffle.

Festive favourites on sale include hallacas (a stew of chicken, beef and capers wrapped in maize dough and a banana leaf and then boiled), pan de jamon (a soft bread with ham and raisins inside), ensalada de gallina (a chicken and potato salad), pernil (roast ham), and some homemade versions of the traditional tipple ponche crema.

The folks from Arepa & Co will also be there, serving the full range of arepa fillings and the pan de jamon they sell on their weekend Camden Market stall.

Given the popularity of the event and the difficulty of obtaining Venezuelan seasonal dishes elsewhere, the following stallholders are taking orders ahead of the bazaar, so nobody goes away disappointed:

After many years in the business of cooking Venezuelan food Alexis and Mary Calvo know how to adapt the ingredients they find in the UK to make their dishes taste authentic. They also run the only Venezuelan cafe in London, Cafe Latino, at 61 Westow Street in Crystal Palace (SE19 3RW). Alexis says they will have traditional hallacas, ensalada de gallina, pernil, pan de jamon, quesillo (creme caramel), dulce de tres leches (a sticky, sweet cake) and papelon con limon (a refreshing blend of lemon juice and cane sugar). They'll also be selling a seafood cocktail that is widely believed to have "rejuvenating" properties. Popular at Venezuelan seaside spots, it is variously known as "Vuelve a La Vida" (Back to Life), "Siete Potencias" (Seven Powers) or "Rompe Colchon" (Mattress Buster). Try some and let me know if it works.
Phone: 0208-771-4078
Mobile: 0750-862-6486
Email: micocinaestuya@hotmail.com
webpage:Mi Cocina es Tuya

Roberto Jardin and Luisa Chavez might look like cowboys in the photo, but there was nothing dodgy about their pan de jamon last year which, was one of the best I've had in the UK.
Currently struggling to fill over 200 pre-orders for hallacas, Roberto says this year will be the biggest yet for the bazaar and they promise to have an even wider selection of savoury dishes and desserts.
Phone: 0178-424-1565
Mobile: 0798-523-9852, 0795-610-1227
Email: robertojardin@hotmail.com

Libia Marulanda has been cooking for the ambassadors of Venezuela for 15 years and makes an excellent ensalada de gallina.
Apart from the hallacas and hallaquitas on her stall, she does a roaring trade in homemade tequenos, the Venezuelan party snack of choice.
She'll also have meat and chicken empanadas and dulce de leche.
Mobile: 0794-487-1422
Email: libiamarulanda@yahoo.co.uk 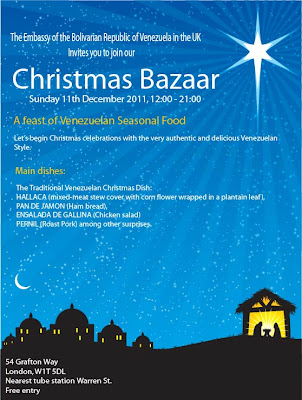 Posted by Russell Maddicks at 9:33 AM

Just too bad that my Venezuelan wife and myself missed this event.

Would there likely be another one for next Christmas or another festival?