On Saturday 12 September Venezuelans around the world will be flying their national flag, playing Venezuelan music, and gathering together in an act of gastronomic unity to enjoy the country's most emblematic national dish: arepas. 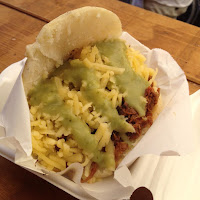 That's because the 12th of September has been christened World Arepa Day (El Dia Mundial de la Arepa), an international event that aims to spread the word about this scrumptious South American street food and turn on local foodies, adventurous eaters, and gastronauts to the joys of the arepa.

In London, the place to be for this culinary celebration is at the outdoor food area by Cargo, at 89 Rivington Street in Shoreditch, where the folks from the Guasacaca food stall will be cooking up a full spread of fillings to delight all tastes, including vegetarian options, from 12-8 pm (although under 18's can only stay until 4 pm).

One must-try arepa is the Reina Pepiada, a lip-smacking combination of shredded chicken, mashed avocado, mayonnaise and peas. Not surprisingly for Venezuela - famous for the stunning beauty of its lady folk - the Reina Pepiada is named after local lovely Susana Dujim, who won Miss World in 1955.

All the arepas cost £6 and you can mix and match any of the fillings on the menu.

According to David Gutierrez Aznar, who runs Guasacaca, it's a huge honour to create a little corner of Venezuela in London on such an important day.

"We really want to make Venezuelans in London feel like they are at home on 12 September, with traditional games, music and, of course, the traditional flavours of our arepas," says David.

"But we also want British people to come over and try our food because every year we do this the feedback is incredible and when people here try our arepas they really love them."

To set a party mood Chebeto Requena, a Venezuelan musician based in London will be providing traditional tunes throughout the afternoon, and Santa Teresa rum cocktails should warm things up if the weather turns cold.,

Guasacaca have also put together some Harina PAN goodie-bags with a kilo of flour, and a booklet of recipes showing how to make arepas. The bags will be raffled on the day.

Posted by Russell Maddicks at 9:32 AM