How to Order Arepas - A Glossary 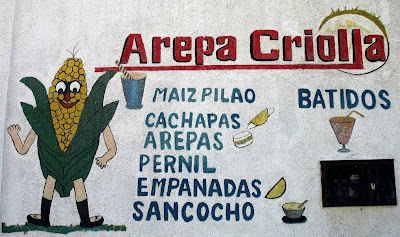 Arepas are Venezuela's homegrown alternative to bread or rolls, cornmeal "cakes" about the size of a hockey puck that are crunchy on the outside but soft and fluffy on the inside.

Infinitely versatile, they can be eaten solo with butter or opened up and stuffed with a variety of fillings to make a delicious snack.

While most Venezuelans will eat arepas at home, if you want something more exotic - to quell your lunchtime hunger pangs or soak up the alcohol after a night on the tiles - then head to an arepera, Venezuela's very own fast-food joints.

First-timers will probably go for a simple option like ham or cheese, but if you want to try something more ambitious here is a brief glossary to help you negotiate the more head-scratching menu items at a typical arepera.

Arepa - Cooked cornmeal pocket stuffed with various ingredients.
Arepitas - Small fried arepas served as a starter to eat with nata (sour cream), or with soups and stews.
Arepa de Trigo - Large arepa from the Andes region made from wheat.

Sauces:
Guasacaca - Avocado sauce similiar to Mexican Guacamole but not as thick. Great for drizzling over arepas or empanadas. Every arepera has their own recipe.
Salsa picante - Hot sauce. Again, every place has its own recipe, so test to see if you can deal with the heat before drenching your food. 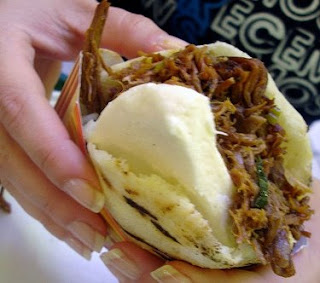 You missed quite a few fillings, like:
Pulpo
Huevos de codorniz
A bunch of different types of cheese